My First Day of Teaching in Spain 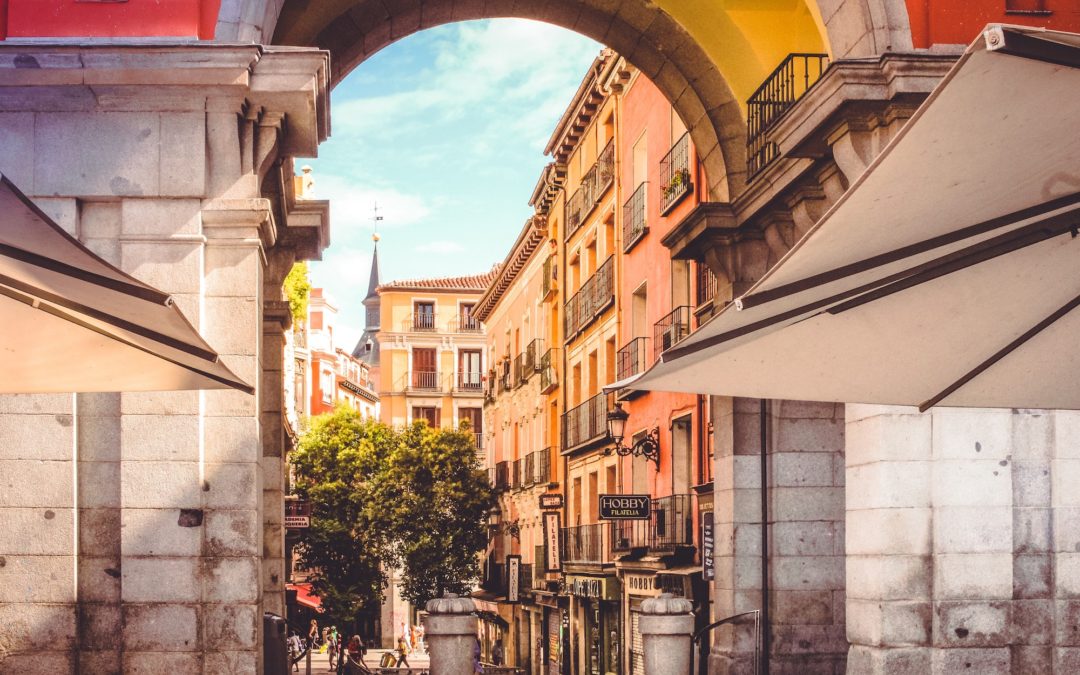 This fall I’m ringing in my six year “Spain-versary.” While you’d think that after over half a decade living in this country it would feel completely normal for me to live here, I still have moments where I suddenly think to myself “What!? I live in SPAIN?”

Plenty has changed in my life since I first moved here in September 2009 to work as an Auxiliar de Conversacion (English Language Teaching Assistant). The most notable being that I’ve traded in teaching English to small children to providing therapy for other expats, many of whom are English teachers themselves.

Moving abroad is an adventure, and no adventures are without their own set of unexpected twists and turns. My own first day of teaching six years ago, which you can read about below, was no exception. Although I was able to see all the unexpected surprises of that first day in an optimistic light, the truth is that the weeks and months ahead following that first day would be pretty rocky. I sure wish I would have known more about the cultural adaptation curve then so that I would have understood how normal my experience was or intentionally sought ways to cope with everything.

It was impossible to sleep last night. I was a mess of excitement and anxiety about my first day of school. I lay in bed, staring at the ceiling and calculating the appropriate first day of school outfit and predicting possible outcomes of my first day in the classroom. If I wore a dress than maybe I would set the precedent that I always dressed nice, if I wore tennis shoes they might think I didn’t care. Would the kids understand me when I said my name was “Melissa?” Or would they think it was “Vanessa,” “Marissa,” or “Martha?” Even in the states people tend not to understand me when I introduce myself.

Finally, 7am rolled around and it was time to get up, choose my decided upon outfit, consume a not-so-Spanish breakfast of granola, yogurt, and fruit, and head down the street to the bus station where I had a date to meet my partner in crime, Nicole, who would be teaching at the very same school. Turns out the buses that take you out to the suburbs of Madrid are much nicer than the city buses, which offer very little room for sitting. I much appreciated the chance to relax in my seat on the 30 minute drive out to Majadahonda. That is until the bus stopped outside the city’s train station to allow at least 25 people onto the already packed bus. Thankfully I only had to survive another 5 or 10 minutes in these now cramped, smelly, and overheated conditions.

When I signed up for this job, I had assumed that my job would consist of teaching entirely English classes. I also assumed that my sixteen hour work week would have me out of the classroom by 1pm. However, when it comes to moving halfway around the world, I am quickly learning that things are rarely how you expect them to be.

While most of my classes will be focused on teaching English, roughly half of them will also cover science. In three of these classes I will more or less be the teacher in charge because this is the first year they are dividing students up by language capabilities and with all of these classes, they now find themselves with a lack of teachers. I will always have a teacher working alongside of me, but in these three classes it will be more for supervision since this teacher will speak very little English. As for my leisurely 16 hour work week, it is now a dream of the past because my school has a two hour break every day which means that I will arrive at 9:30 and leave at 4:30. Technically I will only be teaching 16 hours a week, but I will be stuck in Majadahonda for an entire work day.

As soon as we entered the school this morning we were enthusiastically greeted by all the staff. I don’t think I have ever kissed the two cheeks of so many people in such a short time span in all of my life! It was impossible to remember all of the teacher’s names, let alone the names of all of the students I would be introduced to during the school day.

The first interesting thing I would discover about my school is that although it is not a private school, all of the students are required to wear uniforms. Not that this means they actually all wear uniforms. The school supplies them with one uniform a year, but since many of them come from low income families they often opt for an alternative set of clothes. This came as a surprise to me because I had heard from countless people that Majadahonda is a very “pija” (ritzy and upscale) town, filled with tennis courts and swimming pools. However, it turns out that the students of my school aren’t actually from Majadahonda and in fact the majority of them live in the pueblos outside of the city. Also of note, about 80% of them are not actually from Spain. I met children from Bolivia, Venezuela, Peru, Morocco and Colombia. One of the teachers mentioned to me that even when the children speak Spanish she often can’t understand them because they don’t speak “Spain Spanish.”

A delightful discovery at my school was that rather than ringing a bell to notify students of the start and end of classes, they play classical music throughout the corridors. Last year on World Peace Day, they even played The Beatles, “All You Need is Love.”

All of teachers in my school are very animated and enthusiastic about their jobs and thankfully the ones in the English program actually speak English pretty well (I had heard horror stories from past language assistants that this wasn’t always the case). The fact that I’d be working alongside such wonderful teachers softened the surprise that I’d be at the school for longer hours than planned. Hopefully ending my work day at the same time the students end their school day means that I’ll have the opportunity to meet parents who might be interested in hiring a native English speaker as their child’s private tutor because moving to Spain has been more expensive than I could have ever imagined!

My first day of school was a whirlwind of noting differences between the Spanish and American education systems. First point to note is that the student’s first recess is also “breakfast time.” At 11:30 the students all grab the breakfasts they’d brought along in the backpacks and head outdoors. It is inconceivable to me that these children function for two hours in the classroom without breakfast!! I was delighted to discover that the teachers also receive a breakfast break of coffee, pastries and fruit. Granted, since I am a big breakfast fanatic, this was actually breakfast #2 for me. But what better way to express your enthusiasm for the first meal of the day than by enjoying it twice?

Another interesting difference is related to classroom management. The teachers are constantly yelling at the students to “sit properly” and they repeat the same requests of student’s behavior throughout the entire class with rarely any note of a consequence that will follow if the students do not obey. The possible consequences I did hear included “If you don’t obey I will drop you a language level” or my favorite, “If you don’t obey you will get eaten by a shark.” For someone who worked for two years in an environment focused on effective behavior management (a children’s psychiatric unit), it was painful to watch the teachers struggle to control their classrooms. However, I’m not in Spain to teach effective classroom management or explain the difference between punishment vs. reinforcement, so I just have to take a deep breath and more or less look the other way.

Some highlights of my first day on the job included singing the days of the week and months of the years song with a group of 2nd graders, enjoying a sit down lunch (for only 3 euros) with my fellow teachers, and having a student say (in Spanish) “all of the people in America have white skin and white hair,” only to have the teacher correct her and say “No, not everyone is white and her hair is yellow.” I received lots of hugs and kisses from my new students and throughout the day felt like a cross between a celebrity and an alien. Thankfully one of the other language assistants is also blonde so I am not entirely alone as the only “rubia” in the school, although we both joked that by November we may want to dye our hair black.

The most interesting class of the day was by far my final class where for 45 minutes I was more or less in charge of a group of 8 third graders with the lowest English level. Every week during this time I will be supervised by the principal, who I assumed spoke English well, but when I asked her a question during class she responded, “por favor, español!”

Since it was my first day and I had no idea what sort of supplies I might have, what subject they were studying, how many students there would be or what exactly was defined as “low” English, I had very little prepared. We ended up spending the time drawing sea animals and remembering the names. It turns out there are many sea animals that I do not even know the names of in English!

The students are technically not supposed to know I speak Spanish which made it very complicated for them to communicate their questions to me since they continued to speak in Spanish. I repeatedly requested that they speak in English, but if you don’t have the words, how can you ask the question? I will definitely need to do some brainstorming this weekend to come up with a lesson structure for the classes I am in charge of. Unfortunately, the way the schedule works, I rarely have the same two classes in a row. However, as you can tell from my “Running in Circles in Spain” blog, this is pretty typical for this country.

At 4:30 the bell rang, or rather, the classical music started to play and I breathed a sigh of relief that I had survived my first day within the Spanish public school system. No one had thrown paint on me or called me a stupid American and I had even been invited out for coffee with the teachers. There were moments during the day where I wondered, “what in the world have I gotten myself into, halfway around the world from home,” but there were also definitely moments that reminded me I am exactly in the place where I am meant to be. Little things, like the 2nd grade girls all saying that there favorite color was purple, after I said it was my favorite color. Or my favorite moment of all, crowding around a computer screen with a bunch of 7-year olds to view photos of sea animals (right now the whole school is learning about the ocean), and realizing that, although I have been desperately missing the sight of water that I am so accustomed to in Seattle, here in the middle of the desert of Madrid, the ocean has found me.

How was your own first day as an English teacher this year? One of my best tips for surviving the inevitable hiccups while abroad is to make those moments “blogworthy.” Sure, the bus driver yelled at you, you accidentally said you were pregnant instead of embarrassed, and your students spent all day bouncing off the walls…but how can you turn it into a good story?