Navigating the Season of Goodbyes When You Live Abroad 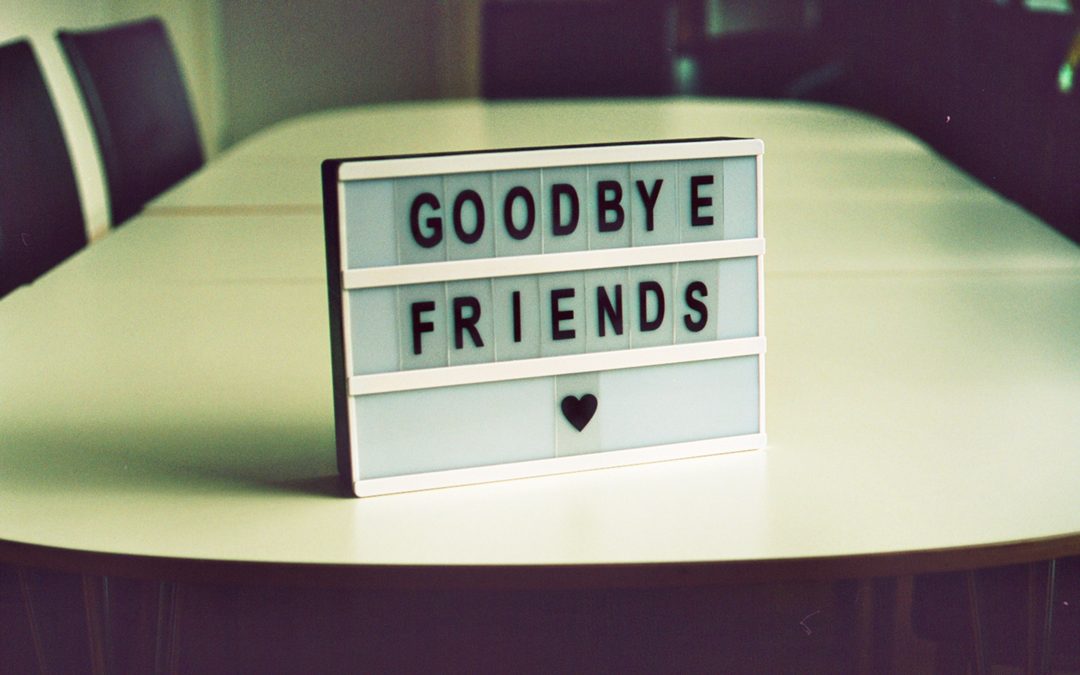 Last summer I had to say goodbye to the home I grew up in. After living there for over three decades, my parents decided that it was time to move elsewhere. It was an experience heavy with emotions and I’m so grateful that despite living half a world away, my visit to see family in Seattle coincided with my parent’s move and allowed me to say goodbye. I’m certain that being able to reminisce with my family, and say goodbye to all the memories that had been lived there, helped me to accept the end to this season.

Many people who are living abroad are preparing for the end of a season themselves during this time of year.  And with the end of a season comes the inevitable goodbyes. Saying goodbye to a job, to your children’s school, or to a city or country you’ve called home.

Even for people who are staying in the same place, the movement that comes with a globally mobile life means that you’re most likely preparing to say goodbye to friends, neighbors or coworkers who have been an important part of your social support system.

If there’s one thing you learn after embarking on a globally mobile life, it’s this:

I personally always thought that the frequent goodbyes when you live abroad would one day make saying goodbye easier. But, after nearly a decade of living abroad, I no longer believe this to be true. Or, at least not in the sense that I imagined. Because when I thought of goodbyes being “easier” I actually meant “less emotional.”

“How lucky am I to have something that makes saying goodbye so hard.”

I actually would say that goodbyes have become easier, but just not in the way I expected. I still spend most transatlantic flights back to Europe wiping away tears. Goodbyes still suck. But, what’s changed is my attitude towards the feelings that arise. I don’t interpret them to be evidence that I’m making a mistake with my life choices or a sign that I am somehow emotionally weak. I remind myself that this feeling is absolutely ok and that it won’t last forever.

Because the more we can trust that feelings, no matter how much they hurt, aren’t permanent, the easier it is to ride the wave of them. I know that any sadness I feel upon saying goodbye will fade in the week to come as I get back into the routine of my life in the place I currently call home. And just like I’ve learned to make space to recover from traditional jet-lag, I now also try to make space to recover from “emotional jet lag” as well.

Goodbyes also get easier because I trust that I am capable of coping with the unpleasant feelings that arise. I trust I can go to my own coping skills toolbox to soothe them. For me, journaling, exercise, having a routine, meeting with friends, meditation (self-compassion meditations are particularly helpful in these moments!), are all ways I know I can keep from getting sucked under by sadness or grief.

And along with making space for the unpleasant feelings, it’s also important to zoom out and remember the big picture and logic of the situation. For me it is this: even if I decide to say goodbye to life in Europe and relocate to Seattle, it will not actually put an end to tearful goodbyes at the airport.

Because by embarking on an international life, I have created a social support network that spans the world. I have met a partner who is not from the country I grew up in. I will likely have kids in the future who decide to live halfway around the world from me. The reality is this: I will never have all of my family and friends in the same place at once.

Which reminds me of my favorite quote about life abroad:

“You will never be completely at home again, because part of your heart always will be elsewhere. That is the price you pay for the richness of loving and knowing people in more than one place.”

Living an international, multicultural, multilingual, globally mobile life comes with the price of saying goodbye. But it also comes with the richness of learning how to say goodbye. Of learning to treasure the people and places when you do have them near.

I find it helpful to compare goodbyes to seasons because I feel the same way about goodbyes as I do about winter: I’m not a fan. During winter, part of me really wishes that it wasn’t happening. That spring would hurry up and arrive with its longer days. But there’s a wiser part of me that I attempt to connect to in these times. She knows that there’s something important to be learned from the rhythm of the seasons and that the symbolism of shorter, darker days can remind me that darker, more challenging moments of my life have things to teach me too.

And this wiser part of me also believes that there is something deeply important to learn from saying goodbye. I do think that if we’re willing to learn how to accept and soothe the painful feelings that come from saying these goodbyes, we may gain a deeper appreciation for some big truths of our existence– that we are only here for a short amount of time, that we have no way of knowing how long we will share it with people, and that endings are an inevitable part of the journey, but they don’t necessarily need to be negative.

“Mindfulness is simply being aware of what is happening right now without wishing it were different; enjoying the pleasant without holding on when it changes (which it will); being with the unpleasant without fearing it will always be this way (which it won’t).”

The truth is, although it is inevitable to have goodbyes when you live abroad, they’re also an inevitable part of life wherever you live. And perhaps one of the unexpected gifts of embarking on a globally mobile lifestyle is that it is an invitation to understand and engage with life in a deeper way than you would have done if you had stayed in one place?

When it was time to say goodbye to my my childhood home last summer, I did so with an arsenal of tools that had helped me with other goodbyes during my time abroad: I wrote a goodbye letter in which I recorded my memories, I got rid of many physical objects, I gave myself permission to cry, and I walked through the empty rooms and actually whispered goodbye to them.

And after this, my family and I went to my parent’s new house and had our first BBQ there together. Because inaugurating the new season is an integral part of saying goodbye. In order to say goodbye well, we must also be ready to say hello to the next season.

So, in this season of goodbyes, I encourage you to practice being in the moment, make space for the whirlwind of emotions, and trust in your ability to navigate the transition into the next season.

P.s. One of my favorite resources on saying goodbye is Rob Bell´s podcast episode on seasons, which has been incredibly helpful for me, as well as many of my clients, in navigating transitions. It was also a big source of inspiration for writing this post on goodbyes when you live abroad.