From West Michigan to Living in Sarajevo: Meet David! 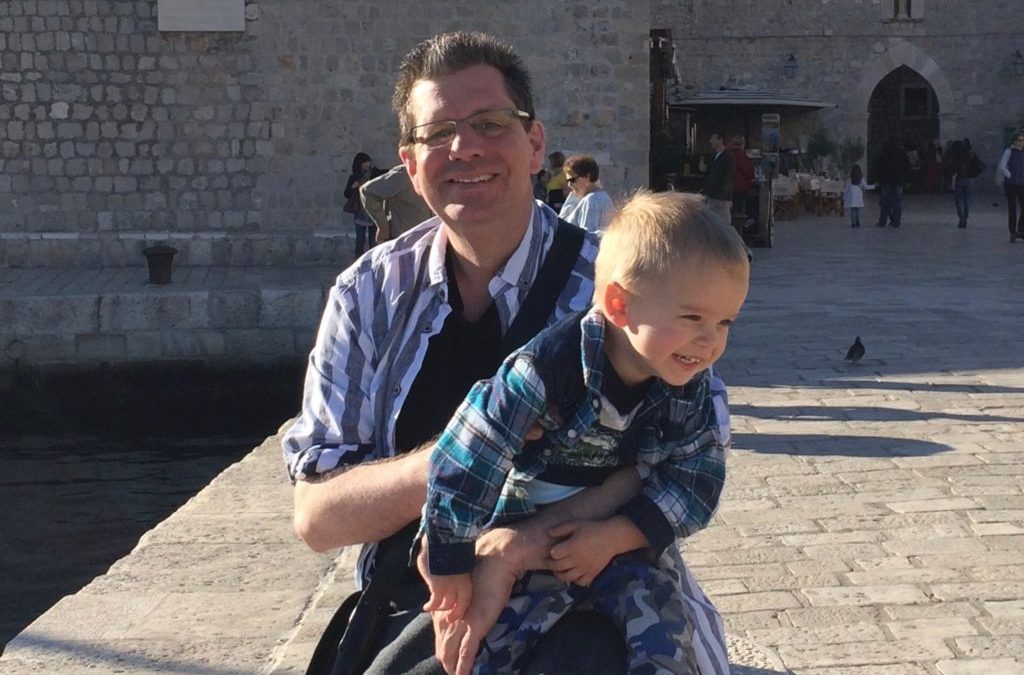 Along with working as coach for global nomads living around the world, I also post an Interview Series on this website where I share the stories of global nomads who have moved abroad, are traveling the globe, or are transitioning to life back at home.

This week’s interview features David Fideler. Originally from Grand Rapids in West Michigan (USA), David visited Sarajevo in January of 2011 to see if he might like to live there. He immediately fell in love with the city, and when he returned to Michigan got his house ready to go on the market. He returned to Sarajevo a couple of months later and has been living there ever since.

David owns a small company that edits and designs books for publishers in the United States and he blogs about his adventures and entrepreneurship at Brainstorm Every Day. He’s also the founder of the Get Great Clients Anywhere Masterclass, which teaches people how to get high-quality clients no matter where they live.

When did you leave the United States? What was your life like before that?

I had a beautiful home in the country in West Michigan. It was a 125-year-old Victorian farmhouse, very private, with beautiful views of the countryside.

I had owned a publishing company for 20 years but sold that in 2004. And around that time the economy was terrible in West Michigan. There were no jobs for people with my skills there, so I decided to start a new, location-independent business, which creates books for publishers.

I started this business in 2005, before Tim Ferris had published The 4-Hour Workweek (2007), and before the idea of location-independent businesses had become cool.

The reason I started it is because the economy was so terrible where I lived, and I wanted to be able to get clients across the United States. Also, I thought that I might move some day, and then I would be able to take my clients with me, or keep working for them, wherever I lived. I never imagined that I would end up in Sarajevo, though.

What motivated you to leave your home country?

After reading The 4-Hour Workweek, I suddenly realized that I could operate my business not just in the United States, but in any part of the world. So I started thinking of places I could travel to and check out, where I could keep working.

About that time I had a friend on Facebook who was visiting Sarajevo. She was posting all of these amazing photographs from the city. Through her, I made some other friends in Sarajevo, and I started to research the city intensely.

For someone from the United States, I found the low cost of living in Sarajevo to be amazing. The average salary is about $600 per month, and people live on that, so the cost of living can be very low.

There were other things that inspired me to come here, too. I have a PhD in philosophy and have also studied world religions, and I became fascinated by the city and its history. Sarajevo is known at “the Jerusalem of Europe.” For 500 years Christians, Jews, and Muslims had lived side by side peacefully, and it’s the only city in Europe — and I think in the entire world — where in the center of town you have the main mosque, a synagogue, an Orthodox church, and a Catholic church located right next to one another.

With my background in religious studies and with my love for history and architecture, I found this to be fascinating. And I was meeting people here with similar interests.

Because I have a lot of specialized interests, I felt very lonely and isolated in West Michigan. I felt like I was slowly dying, both spiritually and intellectually, and moving here was a way to inhabit a larger, more interesting world.

What was the most difficult part about moving to Sarajevo and living there?

The hardest thing, without question, was getting a residence permit. This country has the most bureaucratic system on the entire planet.

When I came here, I thought that I had four valid reasons for getting a residence permit, including taking classes here and doing research for a book, and they turned them all down.

I had a romantic interest here — who is now my wife — and through some miracle she was able to find a volunteer project I could work on, which got me my residence permit for the first year. It went through at the very last minute.

The next year, we needed to get married if I was going to stay, which I was all in favor of. But my wife’s parents, who live in a small village, put all kinds of psychological pressure on her not to marry me, simply because I was an American. They were afraid of what other people in the village would think.

They said some terrible things to her, and I had to convince her to go ahead with it, and that everything would be fine afterwards — and that the storm would just blow over, given a little time.

Fortunately, she was quite brave, and I was right. Everything was fine after we got married, and about a week after the marriage they visited us in Sarajevo and everyone was happy. Since then, we’ve had a son, Benjamin, who is almost four years old.

What’s the best part about living outside of your home country?

People here are far less materialistic than the United States and there is a huge emphasis on families, just enjoying day-to-day life, and meeting and talking with friends. So the culture is very different.

I remember getting a ride from the airport, right after flying into Sarajevo for the first time, from this nice fellow named Samir. And he asked me, “David, is it true that people in the United States spend 60 hours a week working and don’t have time to visit with their friends?” And I had to say, “Yes, that is true for many people.”

There are a lot of positive things here, but also negative things. The very bureaucratic political system here, which is a holdover from the days of socialism, makes it difficult for anyone to start a business. And very few people feel they can accomplish anything on their own here. So if someone has any kind of business idea, he or she will often be ridiculed by friends who will say, “No, you can’t do something like that.”

What do you like best about Bosnia, the country you live in?

We live on a hill overlooking the old part of Sarajevo, in one of the oldest neighborhoods. And no matter how long I live here, it’s always amazing to walk down the hill, past buildings that are 500 years old. There’s so much beauty here. And when you get to the bottom of the hill, you have this amazing mix of Ottoman architecture and buildings from the Austro-Hungarian period. It really is a meeting point between East and West.

Sarajevo is a small city, only 400,000 people, but it’s very cosmopolitan, which is something I love. There are almost 40 foreign embassies here and during the tourist season you’ll be walking through crowds of people and have no idea what language you’ll hear when someone starts speaking.

The other city in Bosnia that is a must to visit is Mostar, which is only two hours from Sarajevo by car, but it has a totally different Mediterranean climate, complete with palm trees. It’s one of the most beautiful and magical cities in the world, with its famous bridge, Stari Most.

Finally, we’re located about four hours away from the Croatian coast, which is on the Adriatic. So everyone goes there in the summertime on vacation, or to visit places like Dubrovnik. (The photo in this post of David and his son Benjamin was taken in the old part of Dubrovnik.)

What has living outside of your home country taught you about life, romantic relationships, family, or professional ambitions?

But since there is almost no entrepreneurial spirit here, I find myself missing it, and it makes me value entrepreneurship much more than I did in the United States, if that makes any sense.

So in the end, living here has challenged me to think about what the best balance is between business, financial security, and daily life — because that kind of balance doesn’t seem to exist either here or in the United States.

What advice do you have for people who are considering traveling or relocating to a new country, but are feeling doubtful?

Just make sure that you’re prepared. And no matter how prepared you are, there will be some bumps in the road.

Also, if you want to run your own business, or be a digital nomad, or whatever, I highly recommend figuring out what you want to do first in your native country and get it going before you leave, so that you already have clients or a source of income before traveling. The fact that I already had an established business and a reliable income made things so much easier when I came here.

Do you have a favorite quote?

There are a lot of people who would like to do something like this, or get their own clients, but they lack confidence in the beginning, which is normal. So I like this quote from Carrie Fischer:

“Stay afraid, but do it anyway. What’s important is the action. You don’t have to wait to be confident. Just do it and eventually the confidence will follow.”

How did you get high-quality clients for your business so quickly?

When I look back on it, it seems amazing in retrospect. But when you start out, you have no idea how it will go, so it’s natural to feel uncertain.

If you go to my website GetGreatClientsAnywhere.com, there’s a free, five-part mini-course on how to get better quality clients. And it explains the exact process I used to get the clients for my business.

If you could go back in time, what advice would you give yourself before starting this journey?

I just wish I had done something like this 20 years earlier.

Thank you so much David for giving us a glimpse of what life has been like living in Sarajevo! I’m certain your story will inspire many readers to move abroad or start their own location independent business. If you’d like to learn more about David, you can check out his website where he blogs about life abroad and provides many useful pieces of information for location independent businesses. I know I’ll be following along to gain some additional tips to help with my own business and to learn more about life in the city of Sarajevo!

ABOUT MELISSA PARKS, THE FOUNDER OF INTENTIONAL EXPAT:

I moved from Seattle (USA) to Madrid, Spain in 2009 in order to work as an English teacher for a year. I soon discovered that when you accept the invitation to become a global nomad, life may take you in unexpected directions! This one year abroad turned into ten, and during that time I earned my master’s degree and PhD in Clinical & Health Psychology, lived in both Spain and the Netherlands, became fluent in Spanish, transitioned from an accidental to an intentional expat, and met my future husband, a fellow global nomad. I recently relocated back to Seattle and provide online coaching for global nomads, If you’re a global nomad yourself and want to be featured in a future interview, please get in touch!