How to Cope with Moving Home After Living Abroad: Meet Cynthia! 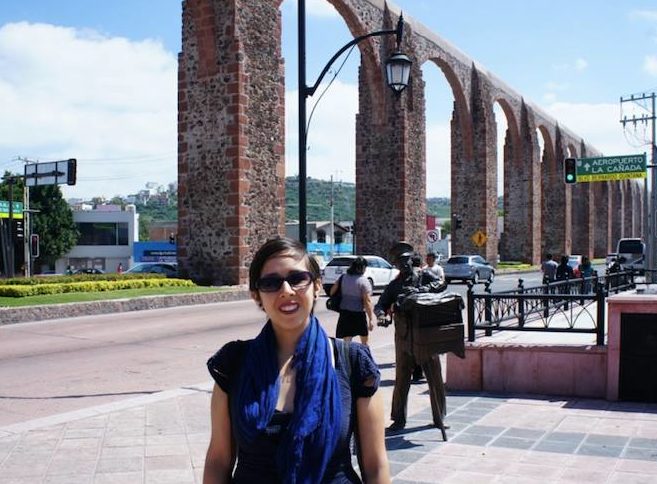 Along with working as coach for global nomads living around the world, I also post an Interview Series on this website where I share the stories of global nomads who have moved abroad, are traveling the globe, or are transitioning to life back at home.

Today’s interview is with Cynthia Rodríguez Martínez, who moved back to her home country 3 years ago after living abroad in Madrid, Spain. She currently lives in Querétaro (México) where she has been working as a psychologist providing therapy for the past 3 years. She fell in love with traveling abroad when she was very young and has had the opportunity to live in Minnesota, Santiago de Chile and Madrid. She always thought that by her 30’s she was going to be living in a foreign country so having settled down at her hometown has been an unexpected and quite wonderful experience.

Where were you living abroad before you moved back home to Mexico?

I lived in Madrid, Spain for almost 2 years (September 2011- August 2013).  I was living there because I was accepted at the Universidad Autónoma de Madrid to study a Masters in Health Psychology.

Why did you decide to move back home?

I was at a Mindfulness and Self-Compassion workshop when everything became quite clear. Moving back was what I needed at the time. Trying to do a PhD project that I wasn’t passionate about or staying abroad just because that was what I once said I wanted to do wasn’t enough. At this moment I remembered that change is a part of life and I had the right to change my mind without it meaning I had given up on my dreams. It just meant I wanted to do something different now.

Was moving home harder than you thought it would be? Did anyone warn you that it might be difficult?

Yes! It was so hard! At the beginning I would cry, had insomnia and my thoughts would go wild telling me I had made a mistake. No one warned me. Most people thought it would be a little sad, but since I was going home that would make it easier. The truth is that Madrid had become a second home, a place where a lot of amazing things happened in my life and that marked a very important part of my personal and professional growth. The process of leaving was quite painful at times.

What were some of the most difficult parts for you?

There were quite a few things, the first thing was packing two years of my life– it was chaotic! I couldn’t believe all the things I had accumulated. Then going from living with roommates to living with my parents again was quite a shock too and then the endless job search.  Last but not least, transportation. Going back to driving was the only option and not my favorite one. Madrid had an amazing transportation system and I had really gotten used to it.

Did you do anything before you left Madrid that helped?

Yes! I visited some of my favorite spots in the city and ate some of my favorite Spanish food. Something that really helped was going to El Retiro park to have a mindful goodbye, I decided to do an exercise where I thanked the city for everything it gave me, I made a summary of what I had learned in those 2 years and promised myself I would be back to visit.

Once you were back in your home country, what made the transition back home easier for you?

Being with my family was the main thing, also hanging with my friends and eating all the things I had missed. Going to Spanish restaurants a couple of times also helped. Also, meditating and working out became really important. I also think that having my parents visit Spain and flying all together back to México was a crucial part of the process.

Is there anything you did that made the transition even harder?

Yes, I kept getting upset about driving. I got into a really negative spiral with that subject and that made me miss Spain more. When I finally started driving it was really bad for a while, but eventually I realized I had two options: I could be happy that I was lucky enough to have a car or be miserable for a very long time. I chose the first and with that decision the grief process became easier to manage.

What did living outside of your home country teach you about life, romantic relationships, family and/or professional ambitions, etc.?

It taught me that I have the ability and strength to solve important issues by myself, that diversity is important and it enriches life, that no matter where I go my family will support me and cheer me up, that friendship can overcome distance and time, and that every place I visited and the people I met on the way left a mark that I treasure.

Do you think living abroad changed your identity or interests?

I think it reinforced my identity and added some things to it. My interests widened, for example I never imagined that I would end up practicing mindfulness on a daily basis.

What advice would you give to others who are considering moving back to their home country, but are feeling doubtful?

Listen to both the logical and emotional part of you, they are both important and will help you in the decision process. It’s not always an easy process, but whatever you decide at the end is because at that moment it was the right thing to do. Something I tell people that are considering moving back home is to remember that people and places change, it is part of life and thinking everything will be the same as before we left only makes the transition more difficult. Embrace the changes, think of going back as traveling to a “new place” and let yourself rediscover your hometown and your place in it.

Do you ever regret having gone abroad? Why or why not?

Never, I loved my time abroad, it meant a lot in my life and is an experience I wouldn’t trade for anything. The whole thing expanded my horizons in a personal and professional way.

Do you think that you’ll live abroad again?

Maybe, who knows what lies ahead, if the opportunity comes and it feels right, I would do it.

If you could go back in time, what advice would you give yourself before moving back home?

To understand that there will be a grieving process that might be hard at times, but it is necessary and that not everyone will understand what you are going through. To be patient and remember why I made the decision of going back home. If at the end I don’t like the choice that I made, I can learn about it and do something to put myself backs on track and change my situation.

What do you hope people say about you on your 70th birthday?

I hope that they say that I have always been eager to learn and travel, and that at 70 I keep going around the world and that I finally learned to speak Danish and that I’m starting with some other fascinating language.

Thanks so much Cynthia for giving us a glimpse of the challenges of moving home after living abroad and how you’ve overcome them. Your story is truly inspiring and I’m sure that readers who are (or will be) in similar situations will benefit from reading your story! If you want to connect with Cynthia you can find her on Twitter or follow her professional Facebook page (in Spanish).

ABOUT MELISSA PARKS, THE FOUNDER OF INTENTIONAL EXPAT:

I moved from Seattle (USA) to Madrid, Spain in 2009 in order to work as an English teacher for a year. I soon discovered that when you accept the invitation to become a global nomad, life may take you in unexpected directions! This one year abroad turned into ten, and during that time I earned my master’s degree and PhD in Clinical & Health Psychology, lived in both Spain and the Netherlands, became fluent in Spanish, transitioned from an accidental to an intentional expat, and met my future husband, a fellow global nomad. I recently relocated back to Seattle and provide online coaching for global nomads, If you’re a global nomad yourself and want to be featured in a future interview, please get in touch!